By Michael B. Farrell 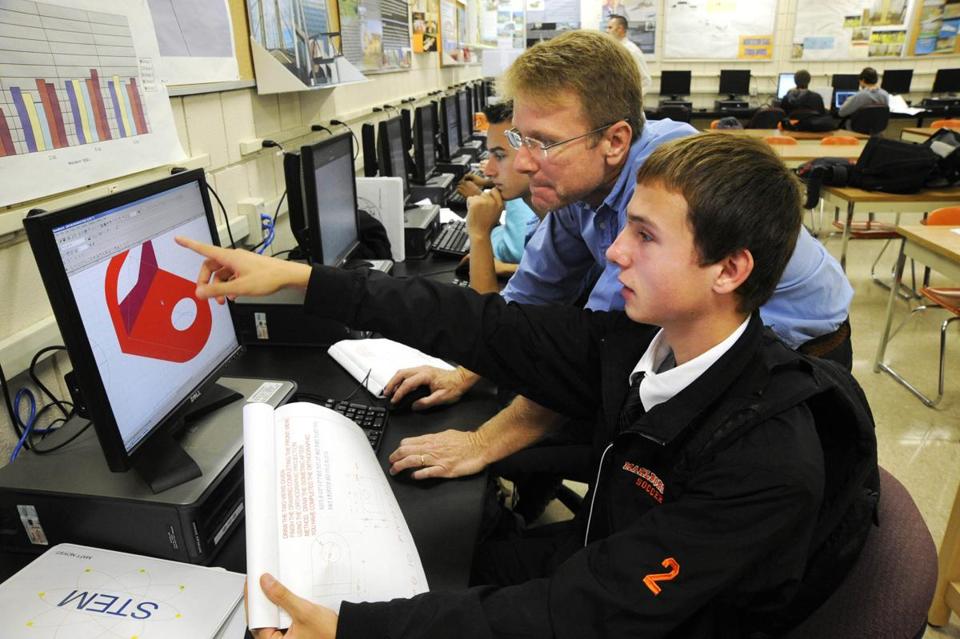 MARK WILSON FOR THE GLOBE/FILE 2011

Executives from Google Inc., Microsoft Corp., and other leading firms want to require all Massachusetts public schools to teach computer science, so local tech companies don’t have to rely on foreign workers to fill future programming and engineering jobs.

The plan would compel the teaching of computer science classes as early as the eighth grade, add computing questions to the state’s standardized tests, and create a statewide curriculum for technology instruction throughout high school. Massachusetts would be the second state to mandate the classes, after South Carolina.

“This is really about workforce development,” said Steve Vinter, head of Google’s office in Cambridge, one of the proposal’s architects.

Vinter and other proponents will pitch the plan to state lawmakers and education officials on Beacon Hill Wednesday. Opposition is already forming. The proposal would require millions of dollars in new spending to implement, as well as the retraining of hundreds of teachers and likely the hiring of new ones. It would also add another layer of teaching requirements and testing to schools.

“It’s a matter of balancing a worthwhile goal against a universe of finite resources, and where there are many important goals,” said Mitchell Chester, commissioner of the Massachusetts Department of Elementary and Secondary Education.

While Chester agrees with tech executives that Massachusetts graduates should be better equipped to pursue computer science careers, he said a better approach would be to incorporate computer teaching in existing course work, or to work with individual school districts to develop their own specific curriculums.

Moreover, the state is currently revising its standards to increase the amount of engineering and technology that public schools must teach, and Chester said additional computer science education is under consideration. Meanwhile a Massachusetts state senator, Karen Spilka, earlier this year filed legislation that would mandate more computer science classes in public schools.

Currently, high school students in Massachusetts are taught a core group of math and science subjects, including algebra and geometry, and engineering topics such as electronics and electronic communications.

In order to graduate, students must pass the Massachusetts Comprehensive Assessment System, or MCAS, tests to determine core proficiency in English, mathematics, and one science and technology field, such as biology, chemistry, physics, or technology and engineering.

Massachusetts eighth-graders routinely lead the nation when it comes to test scores in math and science.

“Computer science has been under-resourced, it’s been an afterthought,” Orlov said.

Many school districts may not be prepared to teach the advanced work that is part of computer science; some still don’t have adequate computers or high-speed Internet connections.The firms said they would be willing to help pay for increased computer education, raising money to help buy equipment and retrain teachers. More broadly, the new federal budget proposed by President Obama would provide $3.1 billion to help schools increase science and technology instruction, including adding 100,000 teachers to the field.

Among the fastest growing sectors in Massachusetts, technology has become integral to the modern economy. More than 10,000 Massachusetts companies work in the industry, directly employing some 180,000 workers. But technology skills — computer know-how — have become pervasive in most other major industries as well, from health care and biotech, to finance and manufacturing.

Across the United States, companies every year need to fill an estimated 150,000 computer science and mathematics related jobs, according to federal labor data. But the nation’s colleges and universities graduate around 100,000 students annually with degrees in those areas. That shortage has prompted tech companies to increasingly turn to foreign labor to fill technology jobs. This year the federal government issued 85,000 visas to US companies to hire foreign skilled workers, many in tech-related jobs.

“When we look at what jobs are available, and what paths students are pursuing, what we see is a profound disconnect,” said Chris Stephenson, executive director of the Computer Science Teachers Association.

She said the tech executives are right to pressure Massachusetts to add more computer-specific education, as opposed to making it a small part of a broader science and engineering curriculum.

“The industry folks are starting to speak up because they can’t hire the people that they need,” she said. “When industry steps up and says, ‘I have 5,000 jobs and I can’t fill them,’ suddenly it just ramps up the whole issue.”

While acknowledging that students need to know more about technology, education officials are uneasy about singling out a narrow subject such as computer science for special consideration when students should instead be learning the fundamentals of math and sciences that apply to a broader array of disciplines.

One of the architects of education reform in Massachusetts, Paul Reville, now a professor at the Harvard Graduate School of Education, sympathizes with the goal of the business group, but said the tech executives are taking the wrong approach.

“We don’t do well mandating top-down course-taking in the Commonwealth,” said Reville, a former secretary of education in Massachusetts.

He, too, suggests the companies should start on a smaller scale, selecting a few schools as a pilot for a more focused approach to the skills gap in technology. If those proved effective, Reville predicted, computer science courses would spread rapidly.

“Those would become the envy of every school system in the state,” Reville said.